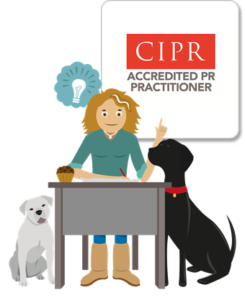 This was her idea – she has a lot of those. A wayward punk back in the day, Sam is a natural disrupter. She is also an award-winning storyteller with some 20 plus years’ experience in B2B tech PR.

Sam began her PR career working with a fintech start-up for four years and then went onto a Fortune 500 for two (that was quite enough), before spending 10 years with one of the foremost London fintech PR agencies. Joining as an account director, she broke several glass ceilings and went on to lead its PR function for London and New York, responsible for the reputations of some 40 clients, including Fidessa, Temenos, Logica and Sun Microsystems.

Sam has been the creative director behind multiple award-winning campaigns. She has a knack of tapping into the authentic and giving it a compelling voice, ensuring that what is said is of real interest to the intended audience. She believes the journalists are her top customers. “If you look after the journos, give them great stories, the rest looks after itself.” So she makes sure every client story is one worth telling.

Sam is passionate about nurturing next generation talent. To that end, in the early days of the Crowd, she was an associate lecturer in PR for The USC and led ’employability’ modules for The UAL and Westminster University. These days she is a volunteer mentor with Career Ready, a UK charity linking employers with schools and colleges to open up the world of work to young people.

Sam converted to the freelance faith in 2011, which evolved into The Comms Crowd in 2012. To make sure there was no going back, she took in a very big, very bouncy dog, part black lab/part something much worse. A succession of animals have followed..She’s still not sure they are a good idea. She lives in a part of London that is not altogether desirable but does have parakeets by day and owls of an evening.