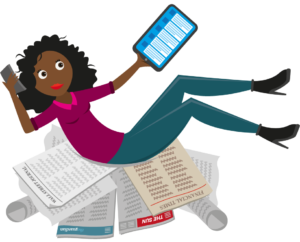 Asah Adolphe joined us for the month of July 2020 as an intern, and many of the team were involved in giving her some experience of different aspects of our work. Debbie Smith, head of tech PR, volunteered to guide Asah through exploring how different media report a story. Below you can read the result, which reminds us that we all need to read the media with a healthy dose of cynicism.

“I lost my mother and now I watch my wife falling victim to the same powerful forces.” The Duke of Sussex discloses that his wife has been a target in the UK media.

When Meghan Markle became the Duchess of Sussex on the 19th May 2018, she resembled a progressive, fresh addition to the royal family. However, despite the Duke and Duchess of Sussex choosing to step out of the limelight since, the media has definitely not passed on the opportunity to keep tabs on the couple, especially the duchess. But why has the majority of the British press chosen to take an opposing stance against her?

Meghan has unfortunately faced significant media invasion ever since Kensington Palace released a public statement back in 2016 where Megan was referred to as ‘Harry’s girlfriend’ for the first time. This is where the international press had a field day and the negative media attention began.

To explain the scrutiny that she was experiencing in an ITV documentary interview screened in October 2019, she admitted that “it’s a very real thing to be going through behind the scenes…” During this interview it was clear from Megan’s facial expression that she was struggling under the constant media attention and her actual words clarified this to the public. Evidently the attention had been a strain on the couple. Prince Harry expressed that this has been a familiar situation for him as he had watched his late mother experience the same pressure from the media. He claims: “Every time I hear a flash it takes me straight back – it’s the worst reminder.”

Different sources have taken sides on how to sell their viewpoint of the couple, but this has been considered more than just harassment. The couple have taken legal action in the past to sue the Mail on Sunday newspaper as they stressed that ‘This behaviour destroys lives.’ The treatment towards Meghan was and still remains malicious and they would go as far as to describe it as ‘bullying’.

Newspapers like The Sun seem to have chosen to focus on negative aspects of the couple’s lives ever since they stepped back from their royal duties; almost as though they are trying to create the narrative that since they are no longer ‘a part’ of the royal family everything has gone downhill for them. This is prevalent as they construct headlines like ‘Amazon slashes the price of Meghan and Harry’s book before it’s even released’. They have even accumulated the phrase ‘Megxit’ as a reaction to the pair choosing to leave the royal family for financial and personal independence. Even the words that they implement in their articles and headlines imply that Meghan is the dominant partner in their marriage by using harsh, negative language when writing about her.

In comparison, newspapers such as The Guardian publish a variety of articles that depict them in an impartial way and tend to stick to the facts of the event that occurred. Different news outlets seem to report the same story but lean towards one side or another in order to sell their narrative. After all, controversial topics and sarcastic phrases do sell.

Evidently the UK news sources have chosen their viewpoint on the couple, but it makes me wonder: if she were white, would they continue to portray her in a controversial way? If she were less opinionated, would they persist in treating her like this?

In the past it has been inferred that the press does not appreciate opinionated women. A prime example would be Gina Miller, as she stood up for parliamentary democracy by fighting against the government. Despite twice leading legal challenges against the government and winning she has had to pay the price with constant media attention and even suffered online abuse and death threats against her and her family. As we can see, there seems to be a pattern of behaviour in terms of how the media treats opinionated women.

As the couple have left their royal duties, are their lives still newsworthy?

Recently, articles are being circulated about Meghan as it seems that most of the British tabloids aim to keep up with the Sussexes, especially their little bundle of joy Archie. The pair made their own lifestyle choice to have independence from royal obligations with the approval from the Queen, but there seems to be a continuous cycle of pointless headlines. For example, The Mirror published a piece with the headline ‘Meghan Markle left beloved dog in Canada as he didn’t like Prince Harry’. In my view this is not a significant topic that the public needs to know about. It is more of a personal experience that is not required to be shared publicly.

Therefore, I believe that it is imperative to remember that news sources are very influential and possess the power to manipulate the public into thinking in particular ways, whether implicitly or consciously. It can affect an individual’s life both positively and negatively, but in Meghan’s case negatively.