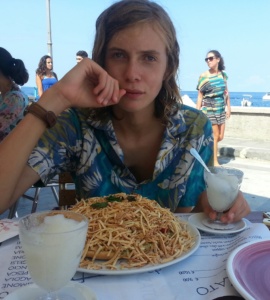 Ergo to sustain independence you need a strategy for coping with the Cabbage Soup Diet one week and the All You Can Eat Buffet the next. Here’s mine:

Feast: I love the pace, the focus, and the fear of The Feast! But this year, instead of doing my impression of an overworked Scrat and chasing down every last acorn, as the work ramped up I pulled in fellow freelancer experts to do the bits that they do best, leaving me to what I do best. Net result – very happy clients (several experts for the price of one) and several happy experts instead of one, which karmicly is a good thing right? In the short term slightly less acorns for me, but by delivering really good work (i.e. better than I could manage on my own) hopefully we planted a few metaphorical oak trees for the long term.

Famine: So I could stay in bed, stare at the ceiling and wonder if I haven’t completely ruined my career… or, instead I could actually look forward to the downtime and line up a load of projects designed to get out of the office, rest the brain and exercise the brawn. You might of heard the whoop of joy as I slammed down the lid of my laptop on 15th May, 10.45am. Over the coming weeks I finally redecorated the bedroom after nine years of dreaming in bloody magnolia. Net result – I swapped eight hours a day for a twelve but achieved an almost zen like mental status and when the ‘real’ work kicked back in, both client side and the house-keeping I returned to it quite refreshed and with rather shapely upper arms.

Regular meals: I struggle when, to my mind, there is not enough ‘real’ work to lace the day with the Fear – so I don’t do it at all. Instead I sand down the kitchen worktops. After several days of this, yes the worktops are very shiny but the real work has insidiously mounted up. The Fear has a genuine reason to be there and I’m in a self-induced state of work bulimia.

Grazing seems beyond me.

But at least if ever I do feel tempted to lay in bed, stare at the ceiling and ponder the vagaries of freelance – I can also admire the paintwork.