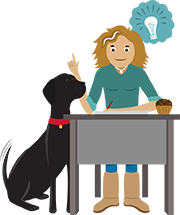 Seven years ago when I gave up my ‘proper job’ running the PR division of a large London agency, the primary motivations were to get back to doing real PR, spend more time with my son and to finally, finally have a dog.

After serving a six month probation to prove I could hack freelance life, I ‘rescued’ Moby – a five month old Labrador cross (crossed with ‘something huge’ was all the charity could tell me). So that was it – no going back. Moby was my insurance policy to make sure I never took a proper job again!

In the early days it was fortuitous that my skills were not so much in demand, as Moby, it turned out, wasn’t sure he was best suited to being a PR hound. As vocations go I think his early preferences would have been to be the companion of a side-order chef, a WWE wrestler or a clown.

He was a turbo-charged Labrador. Owners of bull breeds would put their dogs on leads when they saw Moby tearing across the field in their direction. On an early foray, an experienced dog walker eyed him with reservation as he tussled a Rottweiler to the ground and chewed affectionately on its throat. “Hmm,” she said as we discussed potential heritage, “I’d say he’s part black lab part something awful.”

Whatever he was, he was not office material. He chewed my chair, my shoes and my arms when nothing else was available and only interrupted his endeavours to work out how to open the fridge door or to bay loudly like a Baskerville hound if he noticed I was on a conference call.

Eventually shamed into admitting we had the worst behaved dog in the park we registered for duplicate dog training classes in two boroughs as one class didn’t seem to be enough to quell his, er, enthusiasms. Thinking back I should have expensed this as ‘staff training’.

But in our own way life began to settle down into some sort of freelance fashion; mornings began with Moby pinning me down in my sheets and barking into my face. After breakfast, and Pilates in which he insisted in partaking, a very long walk and then lunch, Moby would finally concede to have a power nap while I got on with some work. On waking it was no rest for the busy with a full on training session, again with hindsight not sure who was training who given how many sausages we got through. Finally a few more hours of focused napping until Elliot came home and Moby could torment him for a few hours while I finished off. End of work was announced by my streaming The Archers as I pottered around the kitchen, and on hearing the theme tune Moby would be ecstatic and parade round the house for at least half an hour with a cushion in his mouth to celebrate the imminence of meal time.

By now Moby was enormous, he towered over proper Labradors, and with his domed head, golden eyes, heavy jowls, velvet ears, sleek coat and beautifully muscled physique, he was a real head turner, the office Romeo if you will. For he was, it turned out, a Labrador Mastiff cross. Here, in the UK that’s a happy accident but in the US it’s a deliberate combination and they are called Mastadors, a breed much prized for their impressive physical build and also their wonderful temperament.

We still had to wait a bit longer for the temperament…

But after a somewhat protracted adolescence, Moby was around two when the fog finally lifted, there he was, the most majestic, most level-headed, dignified dog, an absolute ambassador for the breed – he went from being the worst to the best behaved dog in the park.

And Moby excelled as an office hound, a perfect patient companion, and accordingly went on to receive employee of the month every month for the next five years. He was excellent on and off the lead, in cars, on trains and buses. And thanks to flexible working, he got to go to the seaside every month to dig in the dunes and paddle in the sea by day and lay by an open fire and dream of sheep while I worked in the evening. He regularly went to business meetings where the techie boys tried so hard to not lose their thread, and to uni lectures, where his Barrack Obama good looks and Bill Clinton charisma had the USC girls swooning in unison. He was even the inspiration for our brand identity – how many dogs can say that?

And in return Moby made sure that every working day was a pleasure: that Mondays were no biggie; that office politics were no more than an insistent stare if I had the temerity to sit down at the laptop before finding him a treat; and that in seven years, I never once knew the loneliness that others talk of when working from home.

So as my former agency colleagues continue to climb the corporate ladder and now have every right to look down on all they survey from truly impressive heights, I am jealous not at all – for they may have the power and the glory, but I had Moby, Moby the Mastador. 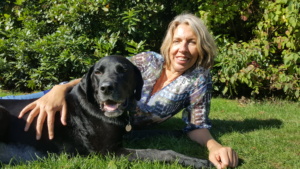