Freelance Life: it’s not just about more time with the kids 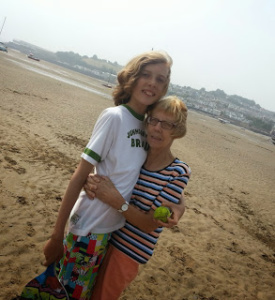 My sister lived near Mum and helped out when needed. However, we noticed  that whenever my sister went on holiday, Mum would fall ill. I’d been fortunate to have an understanding agency boss when I had to make a midnight dash to a hospital 150 miles away and take several days off, but the writing was on the wall – I needed to do more.This helped to crystallise an idea that I’d been considering for some time, so a few months later I took my first steps as a freelancer. I soon discovered the joy of being able to schedule meetings to suit myself and my clients, without having to fit round a team of colleagues. One client was based between my home and where my mum lived. When I suggested meetings on Fridays so I could then go to Mum’s for the weekend, she was more than happy to help. In fact it worked better for her too. Her MD was usually in the office on Fridays so I could be sure to get a meeting with him. As you can imagine Mum loved this – and it helped to stop her worrying that she was a burden.

This also taught me something interesting about clients’ attitude to freelancers. They still expect the same quality of work, and deadlines don’t change, but they understand that you have a life too.

Fast forward a few months and I won some work with a big new client just as my sister was about to go on holiday, so I was on ‘Mum duty’. The project required a lot of international conference calls, but no problem – I worked at my sister’s using her Wi-Fi, then went round to mum’s for coffee and a chat. The people I was interviewing had no idea where I was, nor did they care. On other days I kept Mum company and wrote articles at her dining table. I don’t think she understood what I was working on but she enjoyed introducing me to her visitors!

As we reached the stage where one of us needed to be nearby all the time ‘just in case’, the benefits of freelancing really kicked in. My sister could have the breaks she needed while I worked from the south coast. This is where it helps to be part of a freelance agency like the Comms Crowd, as your colleagues are there to share the work.

Sadly Mum is no longer with us, but the career I built from her dining table has continued to grow and I’d never go back to a 9-5 routine and the daily commute.I’m surprised more people haven’t discussed this reason for freelancing. I very much doubt that I’m unique, but perhaps caring responsibilities aren’t something people tend to raise except with family and close friends. However, with an ageing population and the growing issues around social care I’m sure we’ll hear more about it in the future.