Searching for your soul role

Sam Howard On how the right career will find you, regardless of how hard you try to cram you curves into that square box. 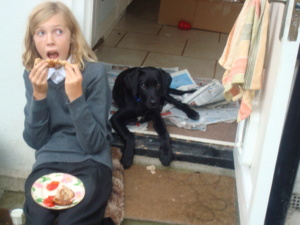 Moby’s just found his soul mate, a boy that spills his food.

I’ve been to a couple of reunions recently. The first, a writers’ group that we formed about fifteen years ago when I was still collecting my boss’s dry cleaning. The second, a work reunion of some five years’ back when I was  a programme director and about to hurtle through several glass ceilings.

What hit me at both events was the way we had all progressed or should that be digressed…E.g. Writer mate 15 years ago – working for the council, now runs his own charity helping other charities set up social enterprises. Another writer mate 15 years ago – a highly ambitious, bright young thing, already head of comms for a funky major brand. Now a lecturer in philosophy at Oxford University. On the work front, a smart account manager I once hired who went on to head up a division at a rival agency, now follows the sun around the globe, to practice yoga on mountain tops. While my boss at that time, now writes tech copy from a caravan in his back garden and is very much in demand…

In my tiny survey of ten friends, 20% were pretty much where we had left them, having accumulated mortgages, pets, partners and babies along the way, 20% had straight-arrowed in terms of career path and were kindly paying for more than their fair share of the drinks, but a whopping 60% had done some weird tangential or perverse U-turn in terms of their career. What did we have in common? We were all pretty pleased with our lot.

So what can I conclude from my poll? That I am and always have been attracted to eccentrics? True. But also, in time you’ll end up where you are supposed to be, no matter how much you conform to someone else’s or even your own image of what you should be ‘doing with your life’.

Our brains are muscles and we can train them to do anything if we have to, if we want it badly enough. But at the same time we all have some natural talents and some natural aversions. So is it any surprise, that among my reunited friends  the cool tech heads are now suited and booted swanning round The City; us big risk takers are all working for ourselves careening form one inspired moment to one unmitigated disaster; the expressives are now pursuing harmonious lives that makes ethical sense; and the structured organisers are going about their lives in some semblance of order, focused on the job in hand and taking no small satisfaction in that.

It seems eventually you do gravitate to roles that tap into your natural talents and spare you the pain of shining a high beam on your weak spots. Very few of us seem lucky enough to land in the right place, right away. But take heart in knowing, that unlike the quest for a soul mate, your ‘soul role’ actually is out there somewhere, and it will find you.