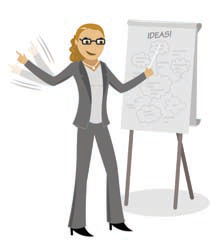 In its latest initiative to bridge the diversity gap, the CIPR is to go into secondary schools to explain what a career in PR entails. On the back of my work with The Taylor Bennett Foundation, and USC Annenberg, I’ll be looking to lend a hand. Odd how things turn out – given that my first ever careers’ talk was possibly a tad off message…

Admittedly the weekend before the gig, it did occur to me that possibly the standard company creds deck, designed to impress your most hard bitten city type, didn’t have quite the right content nor tone for a ten year old from an underprivileged, wildly diverse school in Neasden. But either I built a deck from scratch which would take a couple of days and I would never use it again, or I could just make it up as I went along, after all, what would they know? My talk was scheduled for Thursday.Although not entirely sure of my proffesion, my son’s primary school knew I rushed around a lot, shouted into my phone, and muttered darkly about jet lag. And so the headmistress made inquiries as to what it was that was so important, I had yet to attend a single cake sale. On discovering it was comms, she offered me a slot on careers’ week, saying it would, ‘make a nice change’. I love public speaking me, so penciled it in without a thought.

On Monday, Elliot was, buzzin’. A midwife had kept them enthralled with heart-warming tales of delivering babies, saving lives and what not. “How super!” I said, though this midwife person sounded like bit of a show off to me.On Tuesday, when I picked him up, he was equally full of it. The local policemen had visited with his dog, Blaze, who by all accounts was a magnificent beastie. “Hasn’t he got better things to do?” I miffed, as Elliot noted I was doing 35 in a 30 and that technically he should make a citizen’s arrest right there and then.

On Wednesday, a bloody bastard fireman rocked up.
“Perhaps I should bring in my awards,” I wondered out loud.
“He parked his fire engine in the playground,” said Elli cheerfully, “Let us climb all over it.”
“That’s cheating!” I howled in dismay.
My boy looked at me levelly. “Yep. You’re really up against it now Mum.”

Now, I know at this point, I could have built a deck that talked earnestly about reputation management and CSR. But people, my back was against the wall here and besides my kid was in the audience. That night I dug deep for inspiration and the shiny new deck, was unlike any other deck I have ever built before or after, and ready in the early hours of Thursday morning.

And so it was that I sashayed into that classroom dressed for a full on six-way City pitch. I cast a disdainful eye over my charges.

“So, I hear you’ve met a mid-wife, a policemen and a fireman already. Was it just great hearing about how all those clever, kind and brave people have dedicated their lives to helping others?” And they chorused that it was, it really really was.
“Well I can tell you now,” I said fixing them with a steely gaze.
“I don’t do anything like that at all.” An attentive hush seeped through the room.
“What I do, is a very, very TERRIBLE thing.” There was a collective intake of breath.
“You see,” I said archly as I span neatly on my highest heels and began to pace the room. “I work for the dark side.”

“What I do is make MONEY – by helping other people make MONEY. Lots AND lots of it.” The headmistress actually seemed to be sliding down the wall, but the kids, they were on the edge of their seats…An adrenalin-fueled hour later, sharing a celebratory MacDonald’s with the boy, he passed his judgment.

“I liked the bit when you talked about trainers and celebrity endorsement and brand advocacy. Like, who knew there was no such thing as free will.” And he munched on his onion rings reflectively.Looking at me with a sly pride he pronounced, “You did good mum, you did good.”

Though strangely I was never invited back…