Counting our Blessings: #5 An ‘un-des’ res

‘Tis the season to count our blessings and Sam has counted five of them. In her last four posts she gave thanks that we have been virtual from the start and entirely focused on B2B, with a distinct aversion for organising events and for being part of a team that understands life sometimes comes first. Here’s her final reason to be grateful:

People look a bit sorry for me when I confess to where I live, which is in a deeply unfashionable part of London, on the wrong side of the North Circular, in a distinctly average suburban semi. Not for us warehouse living or the joys of open plan, indeed not one wall has ever been knocked through. In the immediate environs, there are no funky shops, no gastro pubs and no organic anything at all, although we’re spoilt for choice with fried chicken shops.

But for that rather ego-wounding trade-off, what we do have, is what this year became the new must have, was… SPACE.

Space enough to have a large and comfortable office with a door I can open when I go to work and shut behind me when I finish. And it has lovely old French windows that open up to a garden, a long unwieldy shady tangle of a garden that I’m never fully on top of, but it kept me sane and tan just trying. We even have a huge lake at the bottom of the road – no really! It was one of London’s best kept secrets, but not so much now.

And if you do have to share a home office with anyone, at least I get to share mine with Dill and Basil. 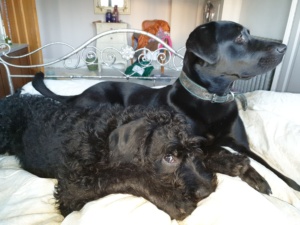 With Elli happily locked down at St Andrews for the autumn was I ever grateful to have the companionship of Dill the little labrador and new recruit five month old Basil, a bulldog/poodle or boodle if you will, and a total charmer like a little furry Hugh Grant. Together they get me out of the house every day, and watching them play is better than any water cooler moment I can ever recall.

Actually I could go on, but I’ll stop at five. To share the love and celebrate our good fortune we’re donating a day’s fee to the team’s chosen charities: The Trussell Trust, providers of food banks across the UK, Shelter, supporting the homeless, and Street Paws, looking after the animals of the homeless.

As this century comes of age, we sincerely hope it starts to behave itself with albeit an enlightened return to the old normal (even if it’s not that different for us) as soon as possible.